It’s not yours anymore 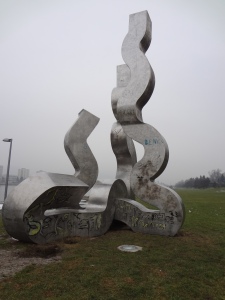 Once you write that blog post or story or novel and you send it out into the world, it’s not yours anymore.  The only way to control something you create is to keep it private, to never tell anyone else about it, to never put it out there.

I was in Linz this weekend and took this picture because I thought it was a perfect visual representation of that point.  Here’s a piece of artwork that someone designed and put their creative energies into.  But others have since come along and marked its surface with their own opinions and statements, changing it forever.

This was a hundred feet from an art museum.  Inside were various pieces of art that someone had decided were worthy of protection, enshrined and kept pure.  But outside was perhaps an equally valid piece of artwork that no one had bothered to protect, that was now the home to random graffiti.

We have the graffiti versions in writing as well.  Pride and Prejudice and Zombies, anyone?  (This isn’t a judgement on whether the new work is good or bad – I haven’t read it.  It’s more a statement that I doubt Jane Austen intended her novel to one day be rewritten as a zombie novel.)

On the positive side, there’s how someone can read your idea and be inspired to move in a new direction, to expound upon it in some meaningful way.  One person’s writing can birth an entire genre.

You don’t know when you write that story whether your work will end up living for ages, will inspire others to see the world how you do, or will be twisted and broken into some new and unrecognizable form.

Whatever happens to it, though, you have to realize that it really isn’t yours anymore.  You can enforce copyright, sure.  But you can’t control the minds of others (at least not yet), you can’t force them to see your work in the way you see it.

And in that vein, a few links I’ve been sitting on for forever.  (Hyperbole, it’s fun!)

Beth Revis on How to Respond to Negative Reviews

“No matter how much you may want to defend your work, however, you cannot. It will never have the effect that you want it to have. Because you are the one who launched the balloon, what you think of the balloon means nothing in the wider world in which it floats.”

I think, should I ever actually get published, that reminding myself that it’s not mine anymore is going to be the biggest challenge for me.  (That and having anyone anywhere care who I am.)

And, being the chatty type I am, it’ll be really, really hard for me not to engage in a discussion about how people have interpreted what I write.  But I know that’s a losing game.  So, hopefully by then I’ll have enough posts on here about those types of issues and I can just point to this post or another and say, “Go read that.”  Which, of course, will start a whole new round of misinterpretations and differences.  And so it goes…

Best to move on and create more and leave your creations to find their own place in life.

M.H. Lee is a speculative fiction writer currently residing in Colorado whose stories are sometimes dark, sometimes funny, sometimes darkly funny, but hopefully always thought-provoking and entertaining.
View all posts by M. H. Lee →
This entry was posted in Advice, General Musings, Writing and tagged being a writer, Beth Revis blog, Kat Goodwin blog, letting go of your writing, real life sucks sometimes, turns out not everyone thinks like you, writing, you cannot count on mind control. Bookmark the permalink.

3 Responses to It’s not yours anymore