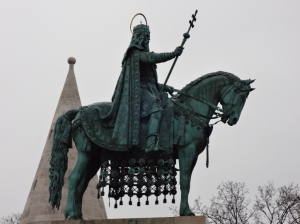 Before I get started I’d just like to state for the record that it sounds like a large elephant is bouncing around in the apartment above me.  And if I knew how to say, “Hey, you big fat elephant quit jumping up and down on my ceiling” in Czech, I might try shouting it at them.  But I don’t.  So, I’ll write a blog post instead.

Seems I’ve built up a few terribleminds posts worth sharing, so I’m declaring this Chuck Wendig Day on my blog so I can share a few of them.

First, “A Short Rant on The ‘You Can’t Teach Writing’ Meme”

Chuck’s opinion on the matter is pretty straight-forward:

“That is a hot, heaping hunk of horseshit and you should get shut of that malodorous idea.”

To a certain extent, I agree with Chuck.  However, as I discussed in “It’s not just a matter of hard work or talent” I think we all start with certain predispositions and innate abilities.  In the same way Michael Phelps has a weird body shape that makes him a fantastic swimmer, some people are just more geared towards one thing or another.  I had a friend in high school who was incredibly intelligent, but never ever could master geometry because they couldn’t mentally flip triangles around to see how they matched up.

And then there’s the whole opportunities, background, education portion.  So, I think anyone can get there given enough time.  I just think for some the amount of effort involved in getting there is enough to be almost insurmountable.

(Which doesn’t mean they shouldn’t try if that’s all they’ve ever wanted in life.  And it doesn’t mean that someone with all the predisposition and opportunity should pursue writing if they have no interest in doing so.  Live your life in a way that works for YOU.*)

Another quote from the article:

“Talent is just a lump of cold, if precious, metal. You still need hard work and effort and desire and trained skill to turn that inert lump into a mighty blade. It doesn’t just fucking happen. Artists are not born into some ‘magical artist caste.’

Writing and storytelling can be taught. If you want it bad enough, you can learn it.”

So, that was article one.  Worth a full read.

Articles two and three complement one another.  Article two is 25 Hard Truths About Writing and Publishing.

Also worth a read.  Basically, publishing is subjective and arbitrary and (I still don’t know why this surprises people) in the business of making money.  Traditional publishing is SLOW.  It’s way too easy to self-pub poorly and you may not get any respect for doing so even if you do it well.  You are competing against everything in the world for attention and everyone is on information overload out there so good luck with that.

“Know your industry. But don’t get bogged by it. Your book can’t succeed if your book doesn’t exist in the first place. Concentrate all fire on that Star Destroyer, mmkay? You can’t control publishing. You can’t control the audience’s reaction to your book. Control what you can control, which means: write the best book that lives inside you.”

And when you’ve read that article and you want to cry and give up and take that soul-sucking job that will deprive you of any spare time you have and wipe away the next ten years of your life before you even know what happened, then read this article: “Yes, Virginia, You Can Be a Paid Writer, Too.”

He provides a great outline of what you need to have in place to make this “real” and not just something you say you’re doing.  So, go read that in detail, because I’m not going to replicate it here.  (I’m being authoritative today since I can’t yell at the elephant upstairs.)

A few quotes to whet the appetite.  (Note to self: add to the commonly confused words list.)

“One’s writing career — the efforts, the time, the stories themselves, and the writer that culminates through all of that — should be seen as an investment. Pay in early, it yields bigger as time goes on. You will earn more as time goes on and as you become more capable — and as you produce more work and gain more audience and garner new contacts in your industry. It’s like a role-playing game. You eventually level up and gain weapons like THE BATTLE-SCYTHE OF STRUNK-WHITE (+2 against stylistic errors).”

I bolded that last bit, because I think it could be even more generally written as “Few people let life get in the way of their work and yet so many let work get in the way of living.”  For writers, writing is a vital part of living.  But for others that could be family, entertainment, sanity, what have you.  Don’t do that to yourself.  Don’t let the way you pay your bills keep you from living a life worth living.  (Ok, personal rant over.  Easier said than done, I know.)

So, there you have it.  All three are worth reading in full.

*If you do decide to pursue something that is going to take THAT much effort to achieve, though, do me a favor and read Of Human Bondage by W. Somerset Maugham.  Being poor is not enjoyable.  There’s a difference between living a spartan lifestyle and not having enough money to eat or heat your home.  Try to stay on the right side of that line if you can.

M.H. Lee is a speculative fiction writer currently residing in Colorado whose stories are sometimes dark, sometimes funny, sometimes darkly funny, but hopefully always thought-provoking and entertaining.
View all posts by M. H. Lee →
This entry was posted in Advice, Writing and tagged being a writer, but you can do it, consistency, of course step one is actually writing something, perseverance, real life sucks sometimes, step two is getting it out there for others to see, terribleminds blog, this shit aint easy, writing. Bookmark the permalink.
Loading Comments...
%d bloggers like this: