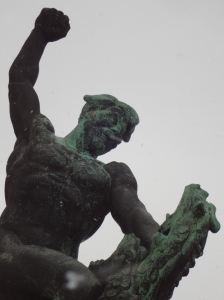 I wish it were more exciting, but after four days of train travel and walking around Budapest in sleeting snow, it just isn’t going to be.  But I am going to hit my “super secret didn’t bother to write it down because it was a random decision” year one blog goal of making 250 posts.  (Of course, I made it only after I stopped posting every single day, because, well, I just didn’t have that much to say about writing after a while.)

I spent about fifteen hours on trains over the weekend.  And I decided to free journal along the way, just writing down what I saw (bright confetti graffiti on the walls, a Brontosaurus on top of a building, etc.) and occasionally writing thoughts that grew out of that state (goodbyes are cusp moments, you can experience a moment or you can record it but you can’t do both, etc.).  It was useful.  I should do it more.

And I managed to also write the first draft of a short story I’ve been thinking about for a few months.  (That is now kind of pushing for novel status.  But I have those two novels I’m writing right now, and another one I’m supposed to do this year.  Funny how before I started writing I thought the issue would be coming up with enough ideas to keep going.  Now the issue is finding a way to turn them into something interesting to others.)

On the train I suddenly had this fear that I’ve been using the word “story” wrong.  As in, two-storied building and that it should really be “storey,” but now that I’m on-line again it seems that’s British vs. American usage.  (The problem with spending time out in the world.  My word usage, spelling, vocabulary, etc. pulls from everywhere.)

I also came up with a new commonly confused word pairing: hoard vs. horde.  Since it’s just one, I’ll update that post with it.  (Hopefully I just linked to the most recent one…if not, you can find it from the main page.)

I have some new posts to share, but I want to put words around them.  And, sadly, Hayibo is gone, so I can’t link to any new humor pieces by them, so you’ll just have to live with a random photo and my ramblings instead.

M.H. Lee is a speculative fiction writer currently residing in Colorado whose stories are sometimes dark, sometimes funny, sometimes darkly funny, but hopefully always thought-provoking and entertaining.
View all posts by M. H. Lee →
This entry was posted in General Musings, Life, Writing and tagged being a writer, free journaling, time on trains, writing, yes I am sure that is not the actual term for it. Bookmark the permalink.
Loading Comments...
Comment
×
<span>%d</span> bloggers like this: