Paying attention to readers…(in this case – my mom) 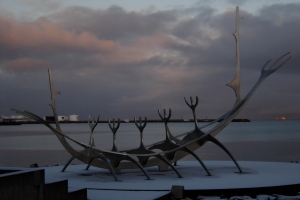 My mom and I had lunch today.  (It’s my birthday and she was kind enough to inform me how she was so exhausted after I was born that she really wasn’t even happy to see me.  Thanks Mom.  Love you, too, and happy birthday to me.) (My gift to you – a random picture I took in Iceland.)

Anyway (my mother issues aside) she mentioned that she was reading 50 Shades of Grey.  Interestingly enough, she just happened to pick it up at the grocery store because she needed something to read and it looked interesting.  She had no idea of all of the hoopla surrounding it except for some vague notion that they might be making a movie of it.

I haven’t read it yet and most of what I’ve picked up has been background noise.  (I’ll borrow it from my mom when she finishes it.)

Now, here’s where it gets interesting to me.  I’m more aware of the book from mentions on writing forums.  And on those forums I’ve seen a lot of moaning (not the enjoyable kind) about how it’s not worthy writing because it started off as fan fiction and how the writing itself is crappy.  I’ve even seen some bashing of the plot and characters.

She also hadn’t known about the Twilight connection, but told me that when she read about the male character she thought, “he’s going to turn out to be a vampire.”  And she said that the female character had reminded her of Bella, but she’d never have thought more about the connection until I told her about it.

So, once again, I think this is a caution to writers to step away from other writers and listen to readers, too.  I still believe that each writer needs to master the basics of grammar, punctuation, and spelling.  But I really think that a lot of the technical issues that writers dwell on turn out to be issues for writers and people in the writing world (editors, for example) but aren’t actually issues for the readers.

I honestly think readers just don’t care about most of it.  When I was reading just for fun, I certainly never thought, “Oh my God, this author just misused lay for lie.  I will never read him again.”  But I have thought, “My God, this book is draaagging.  Please make it end.”  or “Really?  Is this character that stupid?  Has he not figured it out yet?”  Or “Are you really going to tell me that these two get together?  After x? and y?  Really?”

So, obviously I’m learning as I go here, but I think that if you can’t master pacing and don’t have an understanding of human nature that the most perfect grammar in the world will not save you.

Maybe, and I’m just going to throw this out there, writers who complain about these books should stop and figure out what the author did right rather than focusing on what the author did wrong.  I’ve seen people complain left and right about a book and then admit that they haven’t even read it.  What the…?

M.H. Lee is a speculative fiction writer currently residing in Colorado whose stories are sometimes dark, sometimes funny, sometimes darkly funny, but hopefully always thought-provoking and entertaining.
View all posts by M. H. Lee →
This entry was posted in General Musings, Writing and tagged being a writer, criticism, reading, what to write, writing. Bookmark the permalink.
%d bloggers like this: